Cannabidiol or CBD as its more commonly abbreviated to, is taken by a wide variety of individuals who suffer from a range of medical conditions and ailments. Since hemp-derived CBD was only legalized at the federal level back in 2018, most of the benefits associated with taking CBD have relied on anecdotal evidence from users who’ve had success with taking this chemical compound. However, scientific studies are slowly but surely catching up with the legislation, with several confirming the claims made by early adopters of CBD. Let’s take a look at 3 of the most well-known health benefits related to taking CBD as well as the science that backs them up.

CBD Plus is our exclusive line of herbal formulas, that target specific benefits. Nano amplified with our full spectrum CBD. Processed with the TincTract® method, which delivers a liquid herbal product that is highly concentrated alcohol free , Kosher Certified, Halal compliant, vegan and GMO free. In addition, all products are Gluten, Soy, and Dairy Free.
Learn More

Whilst cannabis and marijuana have been used for pain relief for millennia, it hasn’t been until recently that scientists have begun studies to ascertain how and why this happens. It is now believed by scientists that the CBD within marijuana is responsible for interacting with the endocannabinoid system (ECS) which regulates sleep, appetite, pain and immune system response. Studies have shown that by taking CBD, endocannabinoid receptor activity becomes reduced, leading to reduced inflammation. One study using rats found that there was a reduced pain response to surgical incision, whilst another (also undertaken with rats) demonstrated huge reductions in sciatic nerve pain and inflammation. These promising early results already go some way to support the claims made by those who’ve had their lives changed by taking CBD products for chronic conditions such as multiple sclerosis and rheumatoid arthritis.

CBD Can Help with Anxiety and Depression

Anxiety and depression rates are soaring worldwide, with many of those that suffer with mental health conditions turning to CBD to seek relief from their symptoms. Whilst these disorders have been traditionally treated with prescription medication, there is increasing evidence of the efficacy of CBD oil for providing relief from the symptoms associated with both anxiety and depression.  It is believed that the CBD interacts with the brain’s serotonin receptors, which are responsible in regulating emotions of happiness and wellbeing. One study using a group of 24 individuals with social anxiety disorders, were given either 600mg of CBD or a placebo before making a public speech. The group that took CBD experienced significantly lower levels of anxiety, cognitive impairment, and discomfort in their speech when compared to the levels within the control group. Once again, proving CBD to have multi-faceted health benefits.

For those of you who can’t have or don’t want ANY THC our Broad spectrum is for you. Broad Spectrum is not an islolate. The only thing removed is the THC. So It’s rich in cannabinoids and natural terpenes providing a more complete entourage effect.
Buy Now

Our Full spectrum CBD oil is rich in cannabinoids and natural terpenes, which provide the full entourage effect when taken. Our CBD oil is also Nano amplified which reduces the size of the molecules through ultrasonic waves. Nanotechnology makes CBD products more quickly and easily absorbed into the body.
Buy Now

CBD Can Improve Your Skin Complexion – Reducing Breakouts and Acne

Almost 10% of the world’s population from acne or a similar skin condition. Caused in part by the overproduction of sebum, the oily section made the the sebaceous glands in the skin, it is believed that CBD oil can help by reducing the inflammation of the skin and limiting sebum production. Although there are yet to be any human trials, one study conducted under laboratory conditions found that CBD oil managed to: prevent sebaceous gland cells from secreting excessive sebum, exert anti-inflammatory actions and prevent the activation of “pro-acne” agents like inflammatory cytokines. Human trials are still needed to understand how CBD interacts with human skin specifically, but the early signs provided by scientific studies are certainly promising. If you think you are ready to start experiencing the multiple health benefits associated with CBD, then head over to our collection now to browse through our wide range of products. 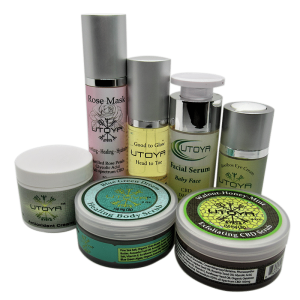