Nanotechnology has been present in hemp products for quite some time. Early in 2017, a few products boasted these values and got some attention. The reason you may have not heard too much about nano-emulsified CBD and D8 THC (Delta 8 THC) products is that the technology only was with a few companies in a few states to start. Even to them, it was relatively new just a few years ago. The equipment was expensive, and the knowledge was mostly between friends who were in other industries.

Today, we are presented with a little more opportunity! The equipment has improved and become more available. Knowledge has become more refined for the hemp industry. As a result, products have greatly improved bioavailability!

Quick Learning: What is bioavailability? How does it work?

Definition/Meaning:  (Physiology Term) : The proportion of a drug or other substance which enters the circulation when introduced into the body and so is able to have an active effect.

Explaination: Bioavailability is when a proportion of a substance enters one of your body’s circulatory systems. You introduce substances every day! When you are eating, drinking, smoking, putting onto your skin, etc., the bioavailability is the amount of the substance that becomes available to your body to use and being able to have an effect.

Bioavailability is measured as a percentage primarily. When you consume something, the amount you consume is considered to be 100% of the substance. The mathematics behind true bioavailability calculations are very complex. If you are interested in learning more about bioavailability in detail, we suggest checking out this free open learning course from the University of Nebraska.

When you rate bioavailability with something like 45%, that means that out of 100% of the substance, your body successfully kept and used 45% of that. The rest goes into your waste and is secreted.

The Overview of How Our Body Absorbs Cannabinoids 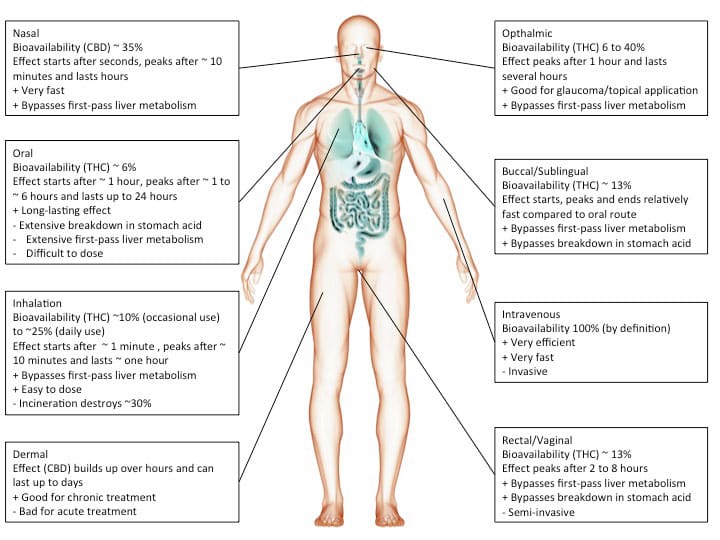 This chart reflects bioavailability for Delta 9 THC. But is a good reference point for where and how cannabinoids are able to be entered into the human body. Credit in reference to GH Medical.

The bioavailability of a standard cannabinoid tincture has an average of 4% to 6% for oral consumption. This means that out of the total oil you consumed, or 100% of the oil that entered your body that contained CBD, you’re body only kept and used 4% – 6% of it, and the rest is removed naturally as waste.

The reason for this is because the CBD molecule (that is isolated) does not directly fit into any of our “receptors”. Our body, just like others with a spine or nervous system, has an Endocannabinoid System. Our endocannabinoid systems are complex and truly fascinating. In short, it is made up of receptors throughout our bodies. These are CB1 and CB2 receptors primarily.

The cannabinoid CBD does not directly fit into these receptors without some special assistance.

There are two common methods to get more CBD into your body:

Additionally, it can be said that it is the most reliable method when nano emulsifying full-spectrum hemp CBD.

What Difference Does Nano Make In Bioavailability if we have Full Spectrum?

What is the big difference between having Nano Emulsified products when the full spectrum allows more cannabinoids in? Why are people telling me that this nano product and that it is two times as powerful as it says on the bottle? I feel like I am being lied too! 500mg is 500mg, right?

Making something “Nano” means we are making it smaller.

This tells us that size matters. Nanoemulsion allows cannabinoids to become much smaller in size.

When we make our cannabinoids smaller, the people are saying that the potency is double what it says on the bottle simply because it is easy to say “This 500mg product will feel like a 1000mg product.” rather than to say: “Your body will absorb roughly twice the amount it would at this potency because it is a nano emulsified product, therefore, your body will not lose as much to waste.” 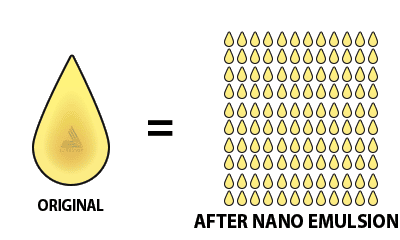 What Happens During Nano Emulsion

Nano Emulsion is the process where we take our cannabinoids that are inside of our solution, and we break them apart from their larger selves.

Why is Nano Emulsion used in Hemp products?

Bioavailability plays a large role in the reason behind using Nanoemulsion.

Cannabinoids are hydrophobic (resistant to bonding with water). Cannabinoids don’t mix into water readily and because of this, it takes a lot of effort to get them to bond. It can be done with great results through nanoemulsion and light use of natural surfactants.

After nanoemulsion, these cannabinoids become hydrophilic, meaning they are able to cannabinoids like CBD can be mixed into water and they will not separate as easily or as quickly.

The human body is over 60% water. Using Nano emulsified products that go from being water-resistant to water ready, we see that the bioavailability is already increased on that factor alone!

This is an important piece for Nano Emulsified products and why we use them.

Nano-emulsion allows our products to become more effective and more flexible in application. Previously, cannabinoid drinks were far and few between, with even fewer authentic products. Now with this technology and knowledge, more drinks, lotions, and other amazing products are gaining popularity!

It used to be very difficult to create drinks that have great flavor profiles while still providing a good dose for our consumers to actually get something out of their product.  You had to sacrifice potency for flavor, or flavor for potency. The middle ground usually didn’t do much justice either.

Lotions were having a hard time getting through the skin at times. Some people didn’t get the penetration further than beyond the surface of their skin. Thanks to nanoemulsion, topicals have greatly improved their efficiency.

Nanoemulsion technology has been an incredible ally to the hemp and cannabis industries and the next years of product development are sure to reveal some very impressive products.

Analogy For Absorption of Cannabinoids In The Human Body 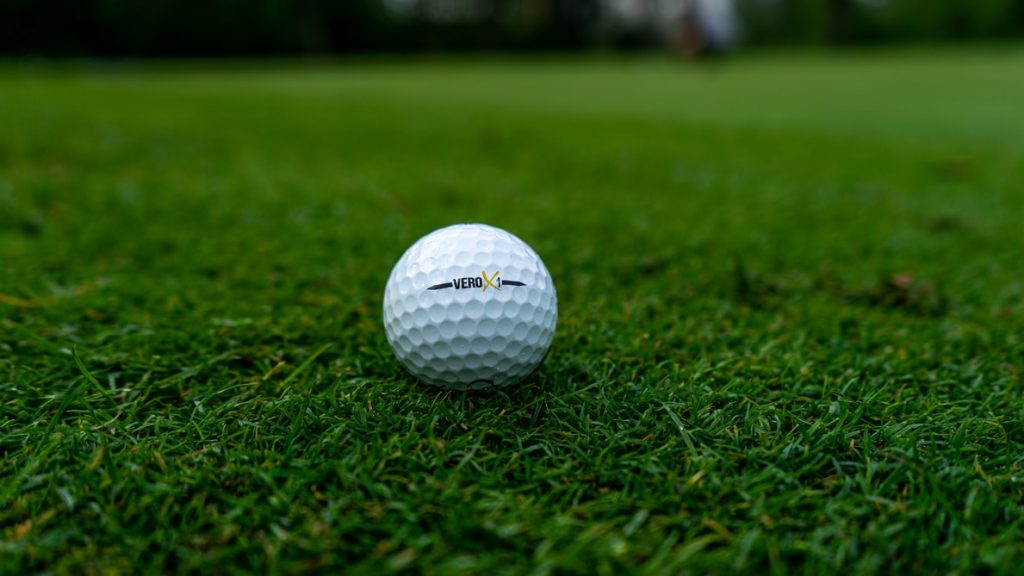 When you are thinking about how molecules get through and into our bodies, the easiest way to imagine this is imagining that your digestive system is like a chain-link fence.

Now imagine this same fence, but instead, hurl the imaginary golf balls.

We know that more of the golf balls (or nano emulsified cannabinoids) will make it through the chain-link fence (or our digestive tract) just based on their size alone.