Scientists and industry insiders are showing excitement about hemp’s potential as a tool in the fight against climate change. They say it’s the world’s most versatile natural product and that it can supercharge efforts to avoid an environmental catastrophe!

Hemp’s natural properties and ability to save land and water can benefit farmers when farmed on a large scale. Many of the products made from it can help decarbonize industries. There is also potential that hemp can absorb significant amounts of carbon and improve soil fertility, something the world desperately needs right now.

Dr. Michael Obersteiner, the director of Oxford University’s Environmental Change Institute, told Metro that there’s good reason to be excited about the cannabis plant. He said:

It might turn out to be a land-saving crop in the sense that you would need more land to produce the same amount of protein, oil, biomass if produced by different specialized crops. The land saving would spare the expansion of cropland into forests. This will create substantial emission savings.

Hemp has wide-ranging applications, including construction materials, biodegradable plastics, and uses in the automotive and aerospace industries.

People working in the sector believe the plant has been underused and overlooked partly because of the stigma around marijuana, another form of the cannabis plant used as a drug. But hemp could help create a lucrative green and sustainable economy – heralding its rapid growth and ability to aerate the soil. It is the world’s most versatile natural product, potentially replacing wood, cotton, and all petroleum-based products.

Compared to cotton – which requires about 1,400 gallons of water for every pound of produce – hemp requires half that, or even less, and yet produces 200-250% more fiber on the same amount of land.

But organizers of the COP26 climate summit turned down a hemp group’s bid to be involved in the event, regardless of some 4,000 ‘expressions of interest from various organizations. This is because experts are being cautious about talking up hemp’s environmental benefits too much, as there are some doubts about how much carbon the plant can retain.

Comparing its carbon absorption to other plants was ‘not very meaningful’ in a ‘climate solution’ context. A field of wheat or cabbages might absorb ten times more carbon than the adjacent woodland. So what? For nearly all crops, the carbon will relatively rapidly be recycled – through processes of decomposition and decay, releasing the carbon back to the atmosphere.

However, Dr. Williamson is optimistic about hemp products like insulation and biofuel, making several industries more environmentally friendly. He added:

There are opportunities here. It could be more cost-effective for producers than current alternatives. In particular, the potential use of the fibers in composite building materials would provide the long-term storage (more than 50 years) that is needed to take the carbon out of circulation.

One of the fundamental ways of limiting global warming is land use. Dr. Obersteiner of Oxford University thinks hemp can be beneficial in this realm. He said:

The land productivity measured in protein or oil per hectare is comparable to near competitor crops, but given that hemp co-produces, in addition, a lot of biomasses that can be used for textile production, construction material, pulping, and specialty chemicals make it an exciting crop. The multi-use also creates an additional internal financial “insurance” effect in the sense that if protein prices are low, then a higher fiber price could compensate and generate a stable profit for the farmer.

The crop needs relatively few inputs like fertilizer to be productive, and hemp seeds are a superfood that can be substituted for animal-based proteins. We will surely see more and more of the different hemp products in UK food, fiber, and specialty chemicals supply chains if this country takes its Net Zero commitment seriously.

But Dr. Williamson cautions against seeing the plant as the sole solution.

He called for it to be acknowledged as one climate crisis battling tool among many. He isn’t alone either, as many other climate scientists emphasize the need for governments to combine various tactics. 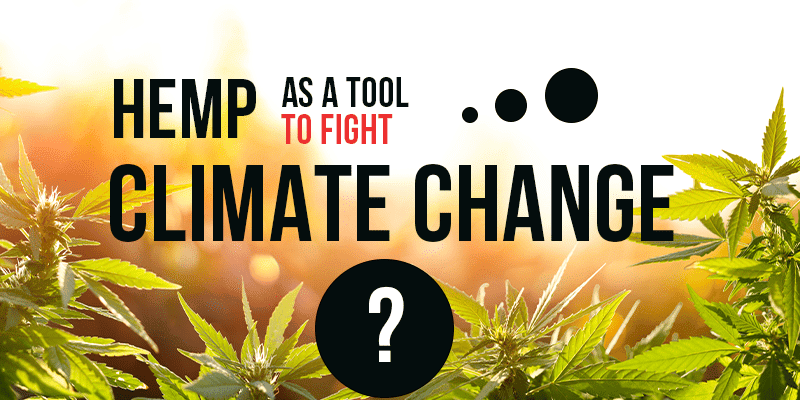