Let’s get one fact completely clear at the beginning of this entire article. Hemp is not and has not ever been, an indica plant. Hemp, by scientific definition, is Cannabis Sativa L. while Medicinal Marijuana is more often Cannabis Indica L and hybrids of Cannabis Sativa F with Indica L. and finally, there is Cannabis Ruderalis, which is the auto-flowering strain of cannabis.

So why is there hemp with Indica, Hybrid, and Sativa varying labels?

We will go over each of these things in depth throughout this article.

For a fun and quick overview, watch Episode 11 of Utoya Live to see how Indica and Sativa were made more into marketing terms.

Cannabis is a part of the Cannabaceae family of flowering plants. This plants are pollinated through the wind and are usually dioecious plants in nature.

Dioecious: (of a plant or invertebrate animal) having the male and female reproductive organs in separate individuals.

Cannabis shares this family with plants such as Hops (what we make beer from), figs, mulberries, and stinging nettle are also in this same family.

Rosales, the rose order of dicotyledonous flowering plants, containing 9 families, 261 genera, and more than 7,700 species. Rosales, which is in the Rosid I group among the core eudicots, is related to other orders with members that can undergo nitrogen fixation (for example the legumes of the order Fabales).

Cannabis Sativa grows taller than the other types of cannabis, as it grows continuously throughout it’s vegetation, growing, and flowering phases. this is due to the tropical origins of Sativa strains.

In regions close to the equator, the amount of daylight does not change very much throughout the year, so Sativa strains are adapted to accomplish both their growing and flowering in a short, fairly uniform photoperiod (The daily number of hours of day (light) vs. night (dark)). It is in this way that they are at the opposite end of the cannabis spectrum from Ruderalis strains.

Sativa flowers are less dense than Indica flowers, despite being equal or larger in size.

Pure strains of Cannabis Sativa often require a combined growing and flowering period of roughly 6 months to ripen completely. For this reason, Sativa strains are rarely used for indoor cultivation or sold as commercial cannabis seeds. All Sativa strains that are viable for growing indoors have been cross-bred with Indica strains to reduce their height and flowering time. Despite the best efforts of geneticists and botanists to reduce the time of the flowering cycle, it seems that Sativa hybrids still have a longer flowering period than that of their Indica relatives.

French naturalist Jean-Baptiste Lamarck, was the first European botanist to classify this type in 1785. recieved his samples from India, and dubbed the plant Cannabis Indica in recognition of this fact.

Cannabis Indica is more compact, thick-stemmed, and bushier than it’s cousins. Indica typically reaches a height of under 2 meters.

The foliage is generally a dark shade of green, some plants appearing to have almost blue or green-black leaves. these leaves are composed of short, wide blades.

Indica strains are prone to produce more side-branches and denser overall growth than Sativa strains, which result in a wider, bushier plant.

Indica flowers for in thick clusters around the nodes of the female plant (the points at which pairs of leaves grow from the stem and branches). The buds typically weight more than Sativa flowers of similar size, and are much more dense and solid.

The Growth and flowering cycle of Cannabis Indica are much like the rest of the Cannabis genus, as it is divided into two distinct phases. The first phase being vegetation, and the second, flowering, which are reactions to different day-lengths (photoperiods).

Vegetation is also sometimes referred to simply as “Growth” or “Growing Period”, although it stands to note that the plant will continue to grow throughout the flowering period as well.

Vegetation occurs when the plant experiences long days and short nights, known as the “Long Photoperiod”. When growing, Cannabis Indica devotes it’s energy to increasing in size and stature. As days become shorter, and nights longer (the short photoperiod), the plant receives the signal that autumn is approaching, and it’s flowering phase is triggered.

During the flowering phase, upward and outward growth slows considerably, and may appear to cease completely as Cannabis Indica redirectis it’s bulk of energy into growing reproductive parts -male flowers which distribute pollen, and female plants which will produce the flowers and cannabinoids that are meant to recieve pollen and produce seeds.

If male plants are eliminated early in the flowering phase (the ones that distribute the pollen), the female plants are prevented from making seeds and their cannabinoid-rich flowers (also referred to as buds, tops, or colas) may be harvested for their use!

The ruderalis species got it’s name from the word “Ruderal”, a term given to wild plant species which are the first to colonize land disturbed by natural forces or human activity. These plants are often found on roadsides or on an agricultural land that has been left in fallow.

Fallow land is all arable land either included in the crop rotation system or maintained in good agricultural and environmental condition (GAEC), whether worked or not, but which will not be harvested for the duration of a crop year. … Fallow land may be: bare land with no crops at all

Cannabis Ruderalis is described as the third type of cannabis, as botanists are currently unsure as to whether or not it actually qualifies as a species in it’s own right.

Ruderalis is an uncultivated strain native to Russia, Central Europe, and Central Asia and is well adapted to the harsher environments found in these locations.

Whether seen as a variation on the cannabis species, or a distinct species all on its own, Ruderalis types of cannabis are most likely descended from Indica varieties, which in turn, are probably descended from Sativa.

The differences between these three types in their growing an reproductive patterns can be linked to the vastly different environments encountered by the original tropical phenotype Cannabis Sativa L. As it spread further and further north of the equater and after the last ice age, the different types evolved to survive in new climates. Humans and agriculture definitely had significant impacts on the indica and sativa gene-pools, however, it was much less influential on wild Ruderalis.

Cannabis Ruderalis is very short in height, often spanning between 30cm and 80cm when fully grown. It produces only a few branches, and has wide, fat bladed leaves similar to that in Cannabis Indica. Once flowering begins, Ruderalis will gain even less height than Indica strains. Ruderalis is sometimes referred to as the dwarf or bonsai cannabis plant.

Unlike Cannabis Sativa and Indica, Ruderalis is able to flower without the assistance of another plant. Sativa and Indica take their cues to begin flowering based on climate cues, such as the hours of daylight available, whereas Cannabis Ruderalis will begin flowering based on the changes within itself, or in other words, when it is mature enough to flower, it will! This is referred to as “auto-flowering”.

Cannabis Ruderalis will begin flowering when it achieves a certain stage of maturity, normally it will be after about 5 to 7 weeks of growth, and it will begin producing seeds in roughly 10 weeks, though more often it will produce seeds in 12 to 14 weeks.) The seeds detatch easily and can survive more than one season in frozen ground, until conditions are favorable enough to allow the growth. The seeds can also survive their shells being cracked open when walked on by humans or animals, and in some situations, the crack can even be beneficial to the growth.

Once Ruderalis has begun flowering, it will continue to do so until the other environmental factors (most notably winter) will cause the plant to die. The other varieties of cannabis may expire naturally once they have accomplished reproduction.

What is Indica Hemp?

To put it plainly, it’s a fake word, a false term. It doesn’t actually exist. So why do we use it to describe certain strains of hemp?

Hemp and even some cannabis cultivars are guilty of doing this to their products, and it’s actually fine as it doesn’t really do anything different to you, the end consumer.

Most people don’t care that the origins of the plant are this or that, or how long it took for the plant to grow and flower. The customer cares much more about flavor, potency, and desired effect.

So how is it that we got to this point? How did we end up just deciding that “This bud is more Indica dominant, and this one is more Sativa” when we know that hemp is 100% Sativa?

For hemp, it’s all about terpenes.

The Terpenes Make The Strain Indica, Sativa, or Hybrid

In todays modern society, we have taken the words Indica and Sativa to mean two very specific types of feelings.

There is a difference though, Hemp cannot be Indica, ever, however, Cannabis certainly can, so the mistakes on this side of the industry are not so common when differentiating the two, but may opt to call one a “Sativa Dominant” or “Indica Dominant” hybrid in order to better relay the potential effects to the buyer.

Will there be true Indica Hemp?

Given how complex and versatile the cannabis plant is, I expect that creating an indica hemp is possible, however, until more science and research is done, this is still something for the bigger folks of cannabis sciences and genetics to ponder upon.

There are a lot of factors that come into play when doing something like this, and for hemp, the most important thing is how much Delta 9 THC the plant will produce V.S. other cannabinoids. The hemp farmers greatest enemy is when their hemp has too much Delta 9 THC, and Indica strains are notorious for their high-concentrations of THC. 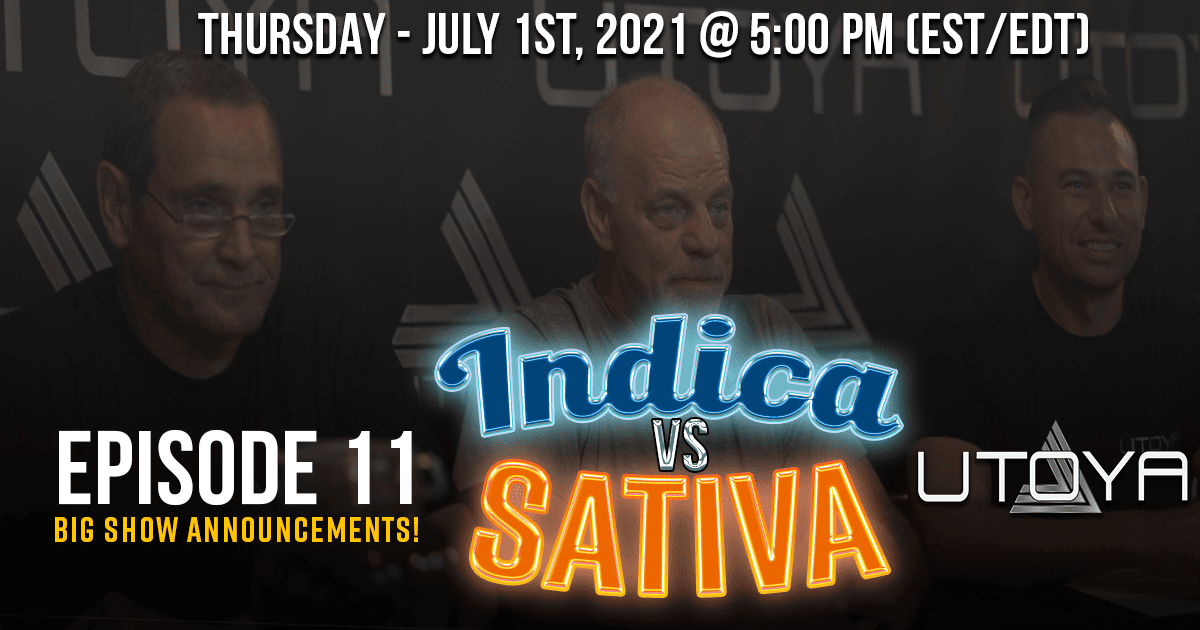 Article Name
Indica V.S. Sativa V.S. Hybrid in Hemp Flower
Description
Your ultimate guide to understanding what it means for hemp to be Indica, Sativa, or Hybrid, and why it matters when you are shopping for hemp and/or medicinal marijuana. Learn about the differences, the similarities, and how we came to marketing terms.
Author
Joseph Edwards
Publisher Name
Utoya Organics
Publisher Logo