Washington state marijuana growers are concerned that, without a change to state laws, their businesses could be severely affected by federally legal hemp.

The biggest concern for them is hemp-derived CBD being converted into delta-8 THC – and even delta-9 THC, the molecule more commonly found in marijuana – then sold as licensed, regulated marijuana products.

At their virtual meeting, the Washington State Liquor and Cannabis Board (LCB) arranged a panel of scientists to discuss plant chemistry. The panel was set to discuss the similarities and differences of delta-8 THC and delta-9 THC – and the definition of synthetic products.

Washington state allows only plants defined as marijuana and grown by licensed producers to be available for sale in MJ retail stores, but the policy statement the state put out in May caused confusion across the industry and made people think the regulators were enacting a temporary ban on hemp-derived THC.

“That is not true,” LCB spokesman Brian Smith wrote in an email to MJBizDaily.

“Only marijuana with a THC concentration of 0.3% delta-9 can be produced, processed, and sold in our regulated system.”

Simply put, hemp-derived products have been banned in Washington’s marijuana market since the state legalized it.

Jeremy Moberg, a marijuana grower with a sun-grown operation in Riverside, Washington, asked during the virtual meeting why the state didn’t permanently ban delta-8 THC -as other states across the country have done – until the science behind it is properly understood.

The way Moberg sees it, Washington state is allowing for a massive import of hemp into a controlled-substance market.

He said the regulators lack control of the pipeline, especially in terms of CBD sourced from out of state.

But more than the policy problems, Moberg is concerned that cheap, hemp-derived CBD will make the rest of the supply chain rich while leaving marijuana growers holding the bag.

“It’s making it so that farmers cannot survive,” Moberg said.

He added that he’s tired of “everybody getting rich off of the farmers.”

While she maintains that unsafe and untested delta-8 THC shouldn’t be sold in unregulated markets, “we believe all THC is THC as long as it’s derived from the cannabis plant.”

She did make the distinction that synthetic THC that is not created from cannabis – commonly known as Spice or K2 – should be banned.

But as long as the cannabis-derived THC is tested for safety and potency, Christophersen would like to see it allowed in the legal marijuana market.

Regarding the concern marijuana growers are raising about hemp-derived CBD undercutting their profits, Christophersen said the state’s job is not to manage competition.

“We don’t think the regulators should be choosing winners and losers by how a licensee sources THC,” she added.

Ultimately, the Washington CannaBusiness Association sides with the possibility for new products that hemp-derived THC offers.

“We cannot hamstring the innovation that’s occurring in this marketplace,” Christophersen said.

Although Washington state temporarily banned lab-created products made from hemp, Sativa Rasmussen, a cannabis attorney in Seattle, said she’s “absolutely seeing these products on the market.”

Delta-8 THC is being sold in licensed marijuana stores as well as in the mainstream market – in convenience stores, for example.

Another important part of this is that Washington state doesn’t track where marijuana companies source CBD.

“The only way CBD can enter the system is if it is being added to a usable or edible marijuana product for the proposes of enhancing its cannabidiol concentration,” Smith with the LCB said.

“CBD cannot be entered in the traceability system.”

But if that CBD isolate is run through an isomerization process that involves an acid-based catalyst, often with a machine that’s similar to a cannabis extraction setup, the THC molecule is nearly identical to that of one found in the marijuana plant.

Hemp Is Not Abundant In Washington

Since Congress legalized hemp in the 2018 Farm Bill, the boom in hemp production has resulted in a glut of cheap biomass that’s processed into CBD at an industrial scale – and rock-bottom prices have followed.

However, Washington has far less hemp production than other states with relatively mature marijuana programs, so it stands to reason that much of this CBD is coming from other markets.

By comparison, in 2020, Washington state had only 182 licensed hemp businesses, with 3,813 licensed outdoor acres, according to the Hemp and CBD Industry Factbook.

In the same year, Oregon had 2,027 licensed hemp growers and processors and 27,434 acres of outdoor hemp acres. 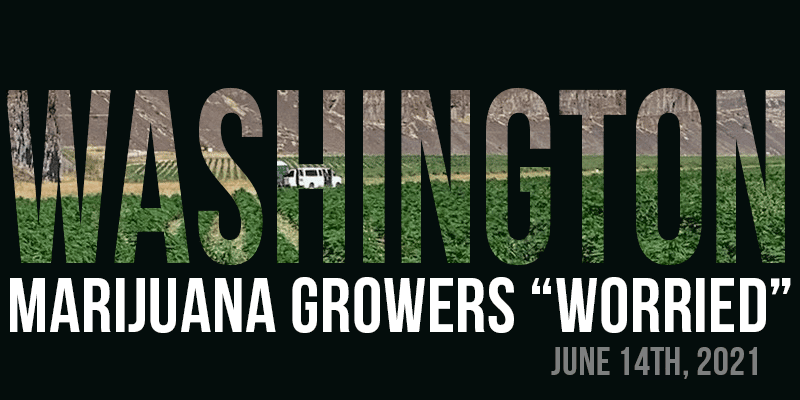